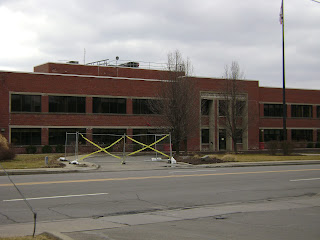 The building I've called TheNakedBuilding waits patiently.  I've written about it before - the 640,000. square foot building, built by the Air Force in 1942, that has proudly housed GE, Martin Marietta, Lockheed Martin and, most recently, BAE Industries.  It is in walking distance of where I live, so I am very interested in its fate.  On September 8, 2011 it was flooded in the aftermath of Tropical Storm Lee, the flood that laid waste to several neighborhoods in the Binghamton, New York area, including part of the neighborhood I live in.

For two months a restoration company tried to salvage the special equipment BAE had inside and the building but was unable to.  The sign on the front of the building was removed.  The parking lots are mostly empty.

Almost all of the interior walls are stripped down to bare metal studs.

Now, it waits to hear its final fate announced.  The over 1300 employees who occupied it until September 8 are scattered, some of them still on furlough.  BAE has pledged to keep those 1300 jobs in our county but they were supposed to announce a permanent location soon after the New Year.  Now we are almost at February 28, the date (I was told by a reliable source) BAE had to vacate the building alltogether (right now a skeleton crew continued to work in the building).  No announcement has been made.

After the decision is made, this wonderful brick building is supposed to be demolished.

I got to thinking.  This summer construction is supposed to start on a regional farmers market.  What if.....

It is directly on a major bus route.  There is a bus stop right in front of the front door.  There are docks in the building already - BAE used to work on and test buses.  There are major highways just a few blocks away.

Flood?  Well, the present site of the proposed farmers market, Otsiningo Park, is also prone to flooding.  In fact, in the 25 plus years I've lived here, I would estimate that Otsiningo Park has closed due to flooding a good 15 or more times.  The site it will be built has never flooded to my knowledge but if you can't get to it, what good is it?

But I know TheNakedBuilding is doomed.  The building will be demolished later this year.  And it will break my heart.  This is a good sturdy red brick building.  It deserves better.