If at first you don't succeed, travel 840 miles and try, try again.

Yesterday, I blogged that (after an attempt last year where we got so lost that we gave up) we had visited Charleston, SC again and made another attempt to tour the Confederate submarine H.L. Hunley.

Success!  This time we found it and we took the public tour.

I wanted to show you three aspects of the story of this marvelous submarine,which was built using cutting edge technology - cutting edge in 1864, that is.  A crew of 8 operated this marvel of technology, hand cranking it through the waves. Submerged, it could wait on the floor of Charleston Harbor for up to two hours.  Light was provided by candles.  The first two crews that manned the Hunley (including H.L. Hunley himself, who basically financed the missions) died in accidents before the ship saw battle action.  Would the third time be the charm?

These are reconstructions of the faces of the 8 crew members.  The full name of two of the crew members isn't known.  They were all volunteers.  Their mission:  to help break the Federal blockade of Charleston.  Look upon these faces well.  Would you have had the courage to serve aboard that tiny sub?  (These were all grown men, by the way - one about 19, one in his 40's with 4 daughters.  They were NOT young teens, as one rumor states.) 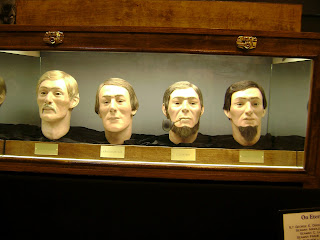 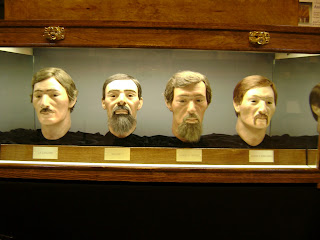 (The public isn't allowed to take pictures of the Hunley, a Confederate submarine which successfully sunk a large Federal ship, the Housatonic, on February 17, 1864.  So, I can't share that with you except to say it lies in a tank, quite rusted, and very fragile. )

After the successful sinking, the Hunley flashed a blue magnesium:  meaning "Mission successful, coming back in".

It never arrived-that is, until the 21st century.

When the Hunley was finally found, at the bottom of Charleston Harbor, the skeletons of the 8 men were found still at their posts, as if nothing had happened.  (What did happen?  One theory is the crew members were overcome by carbon monoxide and carbon dioxide, and embarked on their Eternal Patrol.)

All three crews are buried in Magnolia Cemetery in Charleston, which is the second aspect of today's story. 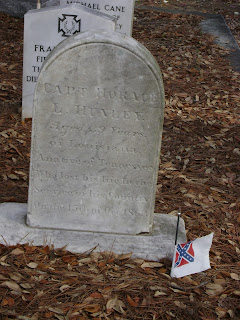 But the story isn't quite done yet. 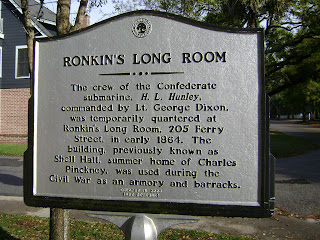 Driving through Mt. Pleasant, South Carolina (a suburb of Charleston), we found this historical marker - the house is no longer there but here is where the crew was lodged before their fateful voyage.

That is the third and final aspect of today's story.

Next week, a story of one of the crew on that fateful night, and his link to the Battle of Shiloh (whose 150th anniversary is coming up early next month).
Posted by bookworm at 7:29 AM