In upstate New York, our downtown Binghamton, NY Farmers Market doesn't open until mid-June (although some open a little sooner).

This summer, construction is supposed to begin on an enclosed regional Farmers Market in Otsiningo Park (just outside of Binghamton, off I-81).  One of the regional farmers markets studied was the one in Asheville, North Carolina.

The state of North Carolina's Department of Agriculture runs several regional Farmers Markets, including one in their capital, Raleigh.  This is what the market looked like earlier this week when we visited it.  What a pleasure it was to find local produce at the end of March.  Granted, some was greenhouse and some was from last year, but it is way beyond anything you can find in upstate New York. 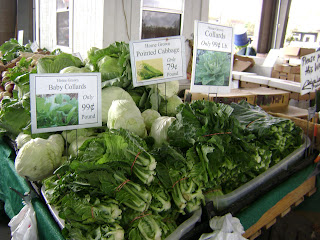 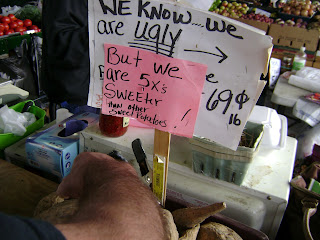 We bought some of these "ugly" sweet potatoes (they were shriveled). We don't know what type they were, heirloom or otherwise, but we will let you know what they taste like. 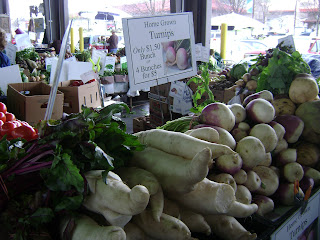 Here, a booth with turnips and rutabagas.

Other booths had plants - perennials and herbs, flowers, trees.  Raleigh is in zone 7b, as opposed to our zone

5b, so we did a lot of sighing over perennials such as camillas which would not have a chance of surviving one of our winters (even in our recently deceased mild winter, it still got to 2 above zero.)

A nearby building featured dairy, wine, meat and other local products. We bought some dried beans.   There was also a LOT of candy - do North Carolineans have a big sweet tooth?

Another nearby building had a seafood restaurant (fried, of course).

I can only hope our regional farmers market, once open, is something close to what we found in Raleigh.

I'm doing my "spring things" today rather than Wednesday, because I may not have internet access for most of the rest of the week.
Posted by bookworm at 7:28 PM