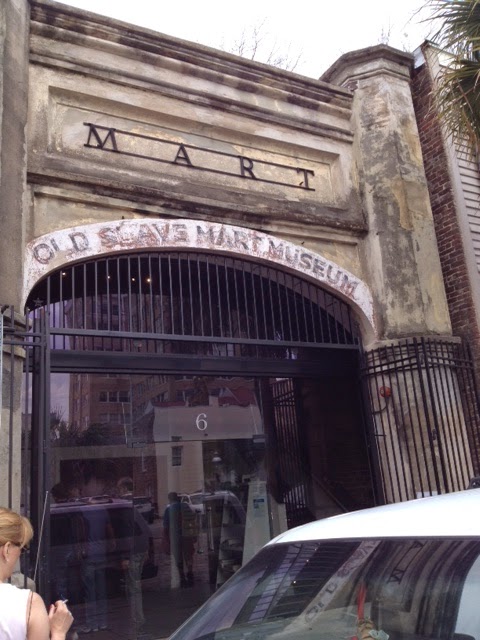 If Charleston was the Ellis Island of Slavery, this building (built in 1859) was part of its Castle Garden. The Old Slave Mart building above was part of a complex where slaves were sold in the years immediately before the Civil War started.  Except for this building, the complex no longer exists.


The Old Slave Mart Museum is a museum of and for African Americans.  Many of the staff are descended from slaves who were bought or sold in the Charleston slave trade.  It is not a museum of artifacts but a museum of facts and requires a lot of reading. It is not a five minute stop.

Which brings us to February 21, 1865, 150 years ago yesterday. the 55th Regiment, Massachusetts Infantry, an all-black Union regiment, entered Charleston, with other black regiments.  Charleston, after a long multi-year siege, had been captured by Federal forces.  The soldiers were hailed by the large slave population of Charleston as liberators.

Some of the Union soldiers had, themselves, once lived in Charleston - as enslaved men.

Now they were free.

On March 21, 1865, a huge parade was held.  A crowd of about 10,000 gathered at Citadel Green, which today is known as Marion Square, where Charleston's Saturday farmers market is held.

The parade started around 1pm and went down King Street to the Battery at the tip of Charleston (and then back to Citadel Green).
Celebrations followed, throughout the year 1865.  As the New York Times put it yesterday, "The capital of slavery had become the citadel of freedom."

Looking as a tourist at these scenes of peace today, I feel awe once again, having walked in the footsteps of history.
Posted by bookworm at 2:16 PM