The Death of Summer

In many parts of the world, today and tomorrow, they celebrate a holiday called the Day of the Dead.

On these days, those who have predeceased us are remembered.   On midnight of October 31 (our Halloween), the gates of heaven open and the spirits of children are released.  Then, on November 2, the spirits of the adults join them.  In the meantime, millions of people have prepared food, sugry treats and flowers to greet them.

There is something very appealing to me right now about this holiday.  Over the last few months, I, and people who I know, have lost loved ones.  My best friend from childhood died in September.  I know someone whose brother died last month.  Someone I graduated from high school with lost his son.  An in law lost her best friend's son and a cousin, and her mother may not be with us for very much longer.  My mother in law lost a friend.

I can not celebrate a virtual Day of the Dead, but I would like to publish some photos I hope will bring me closer to their spirits.

Today I commemorate the Death of Summer.
West Lawn Cemetery in Johnson City, New York, a Jewish cemetery dating from 1895. 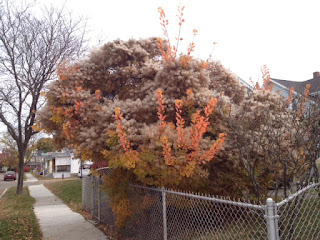 A spooky combination in Johnson City - a smoke tree and a sapling whose leaves have turned orange. 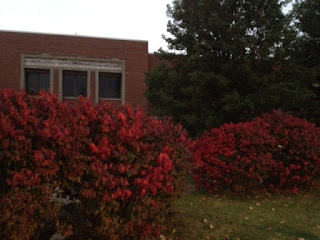 An abandoned, and soon to be demolished, factory building near Johnson City, New York, taken just before dawn on October 20.

But the true death of summer is the first day of Standard Time here in the United States - when it is dark not long after 5pm, and you truly know that winter is just around the corner.

Today is the first day of NaBloPoMo - if you enjoyed this post, check out some of the other great bloggers who are blogging daily during the month of November.
Posted by bookworm at 6:23 PM