Walmart is ending an experiment begun in 2011, with small "express" stores.  Some 10,000 people in the United States, and another 6,000 outside our country, will lose their jobs.

Walmart had hoped that lower income shoppers (who will shop several times a week, as they accumulate enough money to shop)  would embrace the concept of a smaller, 10,000. sq foot type store, larger than a convenience store but smaller than a mega-big box superstore.

All the more reason why you should support your local grower and shop (if there is one) at your local farmer's market.  Big corporations are not there for their customers.  Obviously, all sellers sell to make profits (otherwise, why be in business?), but for small sellers, the customer and his/her needs is always a main focus.

Why?  Because they've met you.  They know you personally.  You are a person to them, not a dollar amount of profits. 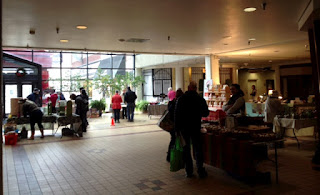 Today, a visit to the twice a month indoor winters farmers market in downtown Binghamton, New York illustrated that. 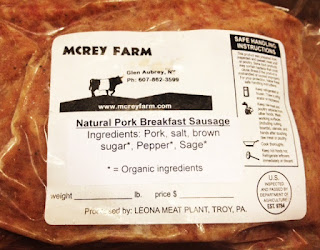 A farmer we've bought from many times invited us to come up to his farm.  "It will be more relaxed there.  We can visit, and we have more items than we can take to the market."  As he spoke, a young woman helping him out smiled and interacted with another customer's young son.  I can just imagine the pleasant memories this young boy will have when he is older. 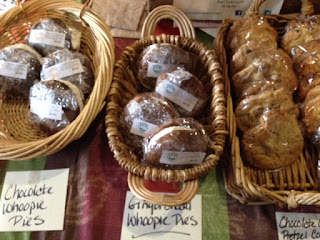 Niechelle Wade, a woman who farms (Sunny Hill Farms) near Whitney Point, New York, greeted me from her booth.  She had chocolate and gingerbread whoopie pies for sale.  I couldn't resist.   These are hand made, with love.

You can get whoopie pies at Walmart, too.  But you can't talk to the baker. 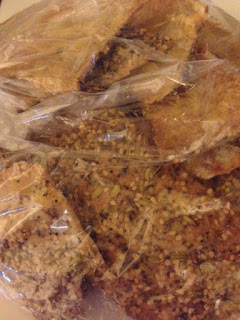 Another bakery person, the owner of Boer Bakery at Downward Slope Farms, chatted with me about her out of this world crackers.  She explained that I could call her before Wednesday and she would have the baked goods I wanted at the Saturday market.  That included her crackers, which are so labor intensive she only makes them by special order now (and not during the summer heat).  She also said if I wanted something not in her selection of breads and baked goods, to suggest them.

Do Walmart executives go out and talk to their customers at their stores?  I wonder.

Perhaps it isn't fair to compare a huge Walmart with small local growers and producers.  But, as far as I am concerned, that's exactly why I like to shop at farmer's markets - because it is more than a trip to buy food and make someone far away that much wealthier.

It's social contact, money that stays in the community and is respent, and food for the soul.

Will you or someone you know be affected by the Walmart layoffs?
Posted by bookworm at 12:16 PM