Searching for Snow in All the Wrong Places

For those of my blog readers who heard of the great blizzard that hit parts of the eastern coast of the United States this weekend, you are probably thinking "Oh, AM lives in Upstate New York.  She should be entertaining us with beautiful shots of snow".

You would be wrong, because we are way below our normal snowfall total.

Not only that, we have barely any snow on the ground. But my readers want pictures of snow for tomorrow's Winter Wonders feature.  So, not wanting to disappoint my faithful readers, my spouse and I embarked, Sunday, on a quest to find snow.
My readers know how much I hate snow.  This January has been a dream come true - for me.  Not for several million other people, but I am sure our turn will come before spring.

First, we headed west.  Hardly any snow on the ground.  So we turned, and we started north. 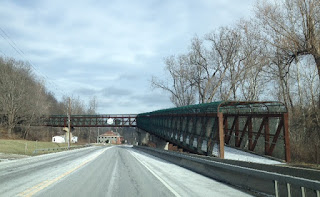 Here, the Catherine Valley trail crosses Rt 14 between Horseheads and Watkins Glen.  "One day" spouse and I will walk some of it.  Now, look carefully on the left.  You'll see green grass.

We must continue North, I said to spouse.

On the way north, we decided to visit some of New York's many excellent wineries.  No sacrifice is too much for my faithful readers.
Several sacrifices later, snow started to appear.  Encouraged, we continued north.

Finally, near Weedsport (named after the two merchants who helped to found the village, not the stuff you smoke) the sun set over snow. We were in the official New York snow belt.  It was about time. Finally, my quest was completed. 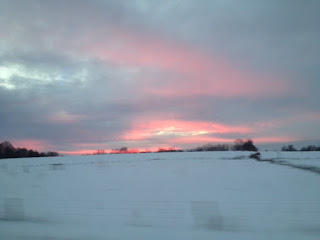 Now, I have to get ready for my phone call with Oprah (more on that tomorrow, maybe).  Yeah, that Oprah. Me and several million people, but that's a story for tomorrow.  A true Winter Wonder.

What was your weekend like?
Posted by bookworm at 8:49 AM