For several years, I spent every Christmas in Yonkers, New York, with some of my husband's family.  Now, my mother in law is gone, and the woman who hosted this dinner can not do so this year.  We wouldn't have been able to come, anyway.  This year, neither of us had the heart to do anything related to Christmas.

Yet, I do have some precious memories of the years when, after dinner, my spouse, sister in law and I would walk to Cross County Shopping Center.

In Yonkers, New York, there is an outdoor shopping center. Both my spouse and I shopped there (well, our parents did - we were just along for the ride) when we were small.

Back in the early 1960's this outdoor mall, the first in Westchester County, New York, contained large and small stores, a play area, and even a hospital.

It was called Cross County Center then, and Cross County Shopping Center now.  It opened in 1954 and is still going strong, unlike many other malls of the era.

My parents would take two buses from our apartment in the Bronx (the northern borough of New York City, which borders Yonkers) to Cross County just to shop there.  I loved those outings.

Several years ago, I was chatting with a co worker where I work in Binghamton, in upstate New York.  I don't remember how we got on the topic of our childhoods, but I discovered that she had been born in the Cross County Hospital, and spent her early childhood in Yonkers, before moving away, eventually to Binghamton.

Then, when I shared the fact that I had Christmas dinner every year in walking distance of that same shopping center, she asked me a favor: would I take a picture of the hospital for her?

I had to break the news to her that the hospital had closed in the 1980's.  The good news was, the building was still there.  I told her I would do my best to get a picture.

So, in 2014, after Christmas dinner, my spouse, my son and I walked to Cross County.

I took the picture she asked for. 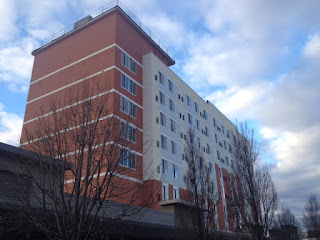 Can you imagine, one day visiting the city of your birth and staying in the building where you were born in?  In a small way, I envy her.

My mother in law's passing on Black Friday, in a way, has made us realize how much of an anchor she was in our lives.  For us, we have to discard some old traditions now, but we know new ones will replace them.  Perhaps what we did this year (which I may blog about in January) will start new holiday traditions - and, in some ways, change is good.