Even in the largest city in the United States, you can find and enjoy trees.


In a Brookyn (part of New York City) neighborhood called Boerum Hill, adjoining downtown Brooklyn, we found this small oasis on Schermerhorn St. between Nevins St. and 3 Ave while walking to the subway on Christmas Eve. 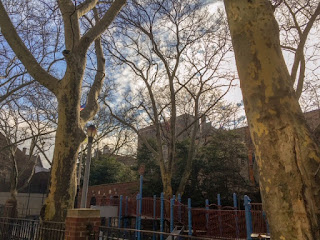 It was called "Sixteen Sycamores" 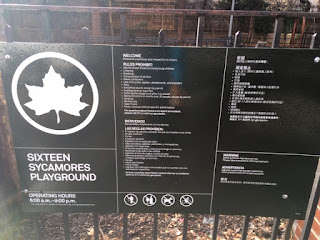 Sycamores, also known as plane trees, are a tree native to the New York City area, identifiable by the white and brown patchy bark.

Don't ever let anyone tell you that New York City is only a city of skyscrapers.  Yes, there are plenty of those, but you can find the most delightful things if you keep your eyes on where you walk.

This is the final Tree Love post of the year and I am so happy to end this with pictures taken in New York City, the city of my birth.

Join Parul and other bloggers on the second and fourth Thursday of the year for #ThursdayTreeLove.
Posted by bookworm at 5:44 AM