It's Friday and it's February 15 - time to watch the sky with Yogi and his merry crew of skywatchers at Skywatch Friday, while I also participate in a monthly gathering of gardeners each 15th of the month for Garden Bloggers Bloom Day.

So what's blooming for me near Binghamton, New York in my zone 5b garden this strangest of all winters?  Up and down, up and down the temperature goes, and when it will stop, nobody knows. 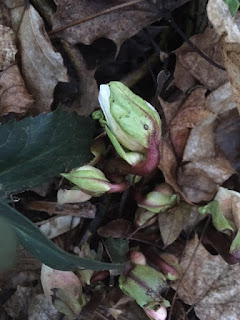 Would you believe me if I told you I had outdoor flowers?  Or, let's be slightly technical here - buds opening.  Well, I do.  Probably.  At least they were out earlier this month. 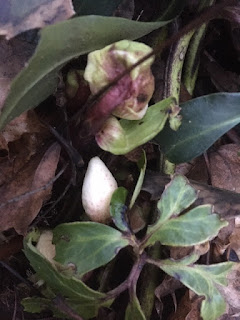 The problem is, I can't show them to you.  They are under several inches of ice and snow right now.  This plant is one of my two Lenten Roses, and it always tries to bloom in January/February.  It doesn't always succeed.  So you'll just have to believe me.

Indoors, it's not a great story, either.  By the time February comes, I'm scraping the bottom of the flower barrel, so to speak, examining every windowsill and my one table with plants under lights hoping for....something to show you. 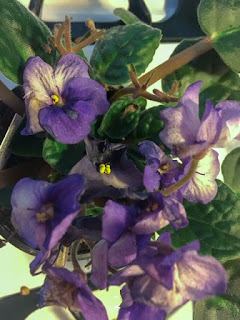 My one blooming African Violet from the beginning of December is almost done blooming. 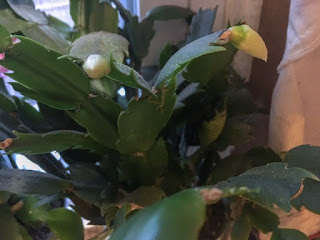 My Thanksgiving cactii are between blooms but have a couple of buds. 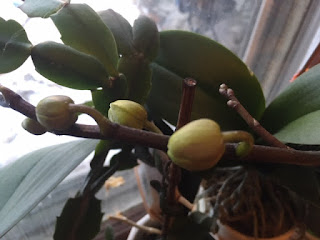 But my one Phalaenopsis orchid that decides to bloom each year has some buds. 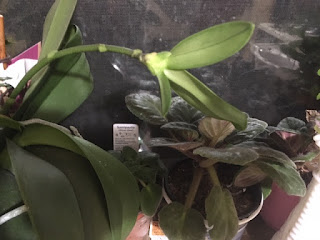 And another Phalaenopsis, which was growing a keiki (baby plant) late last year, is ("ahem") progressing in its "pregnancy" under the watchful eye of some of my other African violets.
Meanwhile, for #SkywatchFriday, I offer this reflection in a melting snow puddle.  The white on the path inbetween some blue are clouds, not snow.  There was melting snow and ice yesterday, but the reflections did not cooperate, so I chose a picture from earlier in the month. 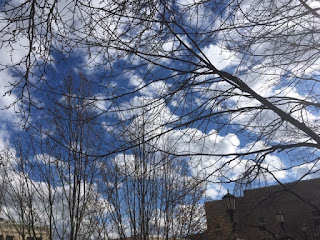 And here's a picture of the sky from a few minutes before the reflection picture.

Thank you, Yogi at Skywatch Friday, and Carol at May Dreams Gardens for hosting these weekly/monthly memes.  Why don't you visit both their site and click on some of the other participating sites?

And thank you, my readers.  In the spirit of Valentine's Day plus one, I love you all. (Well, except for the spammers).

See you next time!
Posted by bookworm at 3:13 AM