Yesterday was the afternoon the power went out on my block and a neighborhood toddler's day was made. 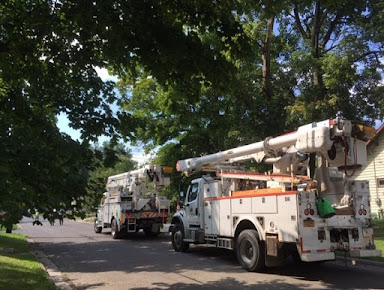 About 2:30 pm yesterday, a cold front came through and the wind suddenly was gusting strongly.  I heard a "bang" in the distance and our power went out.

Although our electric utility's website insisted we didn't have power outages in our area, we obviously did (and a neighbor's electricity was also out) so I reported it.  Perhaps 10 minutes later two trucks arrived.

The other neighbor without power has a young son, and he was so taken by the trucks.  One of the utility workers allowed the boy's father to hold the son. The worker opened the cab and allowed the father to hold his son so he could see all the controls.  I'm sure it made the little boy's day.

It was so sweet to watch. (This picture was taken a few minutes after - they were on the other side of the truck.)

Joining Sandee at Comedy Plus for a sweet #WordlessWednesday.