A Spring Tour Through the Twilight Zone

Today, I will take you traveling through another dimension, a dimension where Binghamton, NY (where Twilight Zone creator Rod Serling grew up) doesn't have snow on the ground at the end of March as it should, but rather has forsythias and bradford pears blooming.  A journey into a wondrous land whose boundaries are drawn by daffodils, grape hyacinth, flowering cherries and tulips.  Yes, it is a spring tour of Rod Serling's Binghamton:  a trip through a floral Twilight Zone.

(with apologies to the Season 2 intro to the Twilight Zone programs). 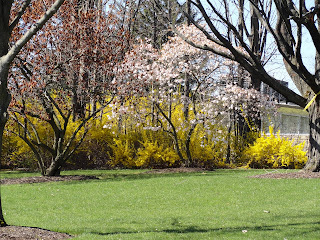 Off of Riverside Drive, about 1/2 mile from where Rod Serling grew up. 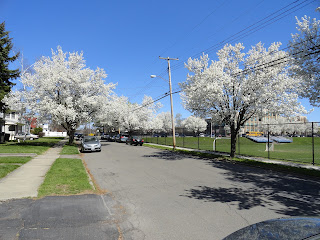 Near West Middle School which Rod Serling attended (then called West Junior High) where he was taught by the remarkable Helen Foley. 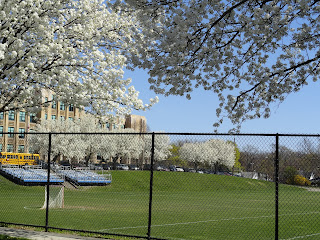 Another view of West Middle School (whitish building to the left) taken near their athletic field. 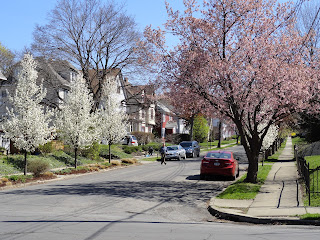 And one more photo taken on Rod Serling's west side of Binghamton.

This spring is so unreal, with plants blooming a good three weeks or so ahead of "schedule"- I wish that Rod Serling had been alive to experience it. It would have a great episode of The Twilight Zone.

Have you had an early spring, too?  Has it seemed a bit Twilight-Zoney?
Posted by bookworm at 5:35 PM