Drayton Hall, located on the Ashley River outside of Charleston, South Carolina is “without question one of the finest of all surviving plantation houses in America” as declared by the South Carolina Department of Archives and History. The southern plantation house was built for John Drayton in 1744, passed through 7 generations and opened to the public in 1977 by the National Trust for Historic Preservation. 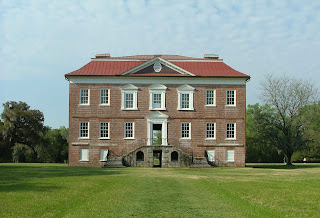 Only three plantations along the Ashley River survived the Union Army after the civil war. Historians believe from reading letters that Drayton Hall survived the post-war destruction because it was used as a hospital most likely for small pox.  There are also 2 other less likely theories on how the house survived.  The first story is about a slave who told the Union troops the house was owned by a Northerner, which could have been Drayton’s cousin. The second theory is Sherman was in love with one of the Drayton women.

Drayton Hall is different than other historic houses in that it is preserved as compared to restored.  As you wander the rooms with a guide, you see the original plasterwork, a back circular stairwell and cracked, faded paint, much of it last painted after the civil war and it wasn’t painted again. You’ll even the see hole for the “toilet”, which fit a bed pan.  Still void of electricity, heat and plumbing, this is a true historic house. Especially after touring restored plantations with luscious gardens in the Charleston area, there is a stark beauty and appreciation experiencing the historic house in its raw state. 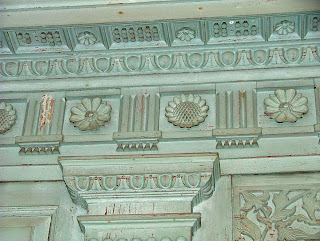 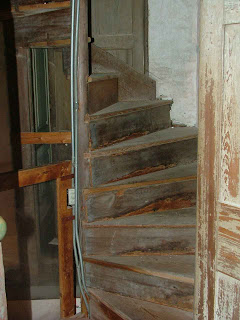 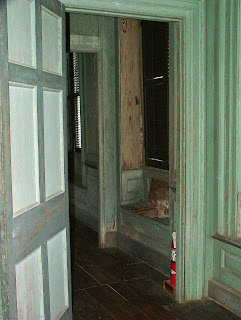 If you have an opportunity to visit Drayton Hall, make sure after touring the house to wander the spacious grounds and view the house through the reflection pond. 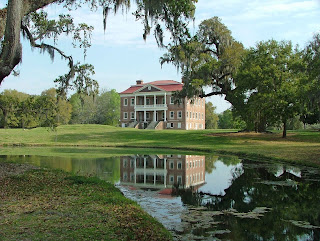 Christina is a blogger from Phoenix, Arizona with a passion for running and travel.  In June 2011 she vacationed in South Carolina and fell in love with Drayton Hall, especially the reflection pond.  Visit Christina at Lazy Bones Running
Posted by bookworm at 12:00 PM