I had planned to use "Sustainable Saturday" mainly for food and agriculture, but am stepping a little out of my comfort zone for today's post.

Today, as part of the New York Heritage Weekend, venues all across New York State held open houses or festivals.  Since it was Sustainable Saturday, I visited a venue called the Center for Technology and Innovation.

This center is located just outside of downtown Binghamton, New York, in an industrial area.  They hold, I found out, several open houses each year.

One of the missions of this center is to preserve and restore technology that was developed in our local area.  (Did you know, for example, that innovative car companies operated in upstate New York during the early 20th century?) I will feature more about their mission in a future blog post.

Today, as part of Heritage NY, the Center was demonstrating the technology of tomorrow.  This included several types of hybrid or  vehicles and a hybrid lift that uses the downward motion of the lift to generate power back to the unit.

I have talked about BAE Systems, late of my neighborhood, and relocated in nearby Endicott (ironically, on the former IBM campus - IBM having originated in Binghamton, NY as a time machine manufacturer and then moved to Endicott and eventually the world) due to flooding caused by Tropical Storm Lee in September 2011 that destroyed their Westover facility.  This is one of the items that they manufacture - a hybrid truck 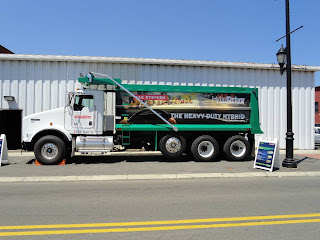 Another thing they manufacture is hybrid buses - they used to test these in my neighborhood and I would see them sometimes. 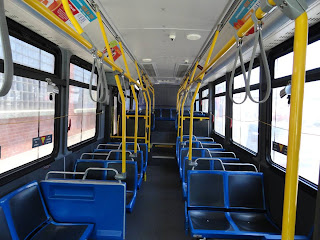 There were several electric cars on display:  a Chevy Volt (not made here but it was a local dealer displaying them) which is not a true hybrid; and an electric car that was once a regular "gas guzzler" 87 Dodge Daytona until modified by its owner, Jason Horak..  He explained the modification cost about $25,000. (not too cost effective, admittedly) but he can go 100 miles on a charge, which currently costs him about $2.00.  Here is an explanatory poster, and a picture of the back batteries. 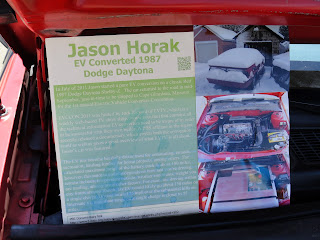 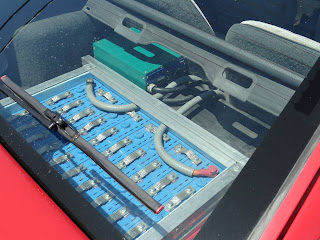 Jason explained to us that although it appears that the batteries appear to take up most of the hatchback, in reality they are set pretty far down and he carries luggage, groceries, etc. in the back (with a cover, of course) easily.

This is a picture of the Chevy Volt, which, again, is not a true "hybrid" but does have a gasoline engine in addition to being able to run on electricity. 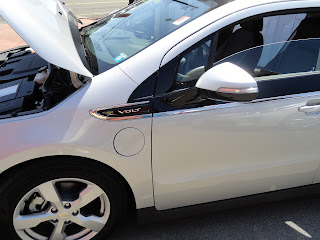 And finally, the lift, which is manufactured by local Raymond Corporation, a manufacturer of forklifts. 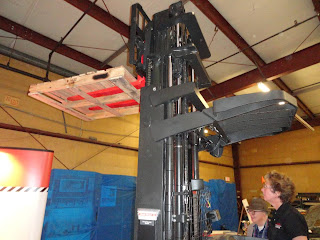 ( here is a video demonstrating the lift in action).

Do you think a hybrid vehicle is in your future?  Does your home town use hybrid mass transit vehicles?  Or manufacture hybrid equipment?

Email ThisBlogThis!Share to TwitterShare to FacebookShare to Pinterest
Labels: technology