Last Saturday, I blogged about our adventure with learning to use a slow cooker to cook for our elderly mother in law, who we are giving care to during her recovery from a radiation implant surgery. Our learning project was a free range chicken - probably a roasting hen.

On day one, we slow cooked the chicken and made chicken cacciatore.

But then what?  We had a lot of leftovers, and decided to make shredded chicken burritos for Sunday dinner.  It would be good for my mother in law, who had an appetite, but didn't have her usual appetite last weekend. 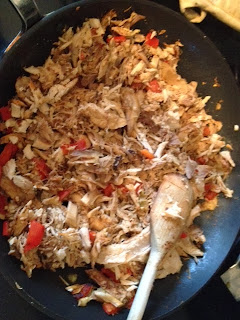 The chicken had cooked to falling apart tender in the crock pot and shredded easily. My spouse, the family cook, combined the chicken with a sauteed red pepper (to give it a "roasted red pepper" taste), and some chicken broth to moisten the mixture.  Then he served the chicken in one bowl, shredded cheese in another, lettuce in still another bowl, and, finally, some homemade guacamole, for people to choose as they wanted.  We served pre made salsa (from a jar, sorry) on the side.

My brother in law, who has a developmental disability called autism, had never rolled a burrito. The burrito skins are circular wheat tortillas and there is a trick to rolling a burrito without it falling apart when you try to eat it.  He rolled it with my spouse's help, but really didn't like the idea of a burrito.  He requested seconds, but without the tortilla.

My mother in law, who is in her mid 80's, grew up in Yonkers, New York when parts of that city were still rural.  She remembers merchants who would travel the streets with live chickens.  Her mother would buy a live chicken and would have to do the slaughter and preparation for cooking herself.


It was a much slower time, during the Great Depression, when my mother in law grew up.  She has seen so much change in her 80 plus years, and has had to adjust to so much - everything from television to computers to cell phones. She's adopted many cooking conveniences and used them - the microwave, for example.  But, the slow cooker, I think, was so big that its insert was too heavy for her, and she couldn't clean it in her dishwasher.  It's nice for us to experiment with it, though.

This weekend, we will make one of my mother in law's favorite soups (I'm not sure if we will use the slow cooker, though).  Perhaps, next Saturday, I'll post that recipe. Maybe I'll even remember to take pictures.

What is your favorite way to slow cook chicken?
Posted by bookworm at 9:25 AM