Recently, I blogged about the dying art of letter writing.

Yesterday, I read a post about a blogger and his visit to his maternal grandmother.  She had kept a treasured photo of her childhood.  She showed it to him.  The photo was about 75 years old, and was of a 10 year old girl, dressed formally, with a frown on her face.

You guessed it - the elderly grandmother was the young girl in the photo.  He marveled at how many details of the taking of the photo his grandmother remembered.

So he took a picture of his grandmother, and other pictures during his visit. He promised to give a photo to his grandmother.  He didn't print one of of vacation photos, though, not one.

Number of photos printed out from my phone = zero.  What do they include? Well, pictures of my spouse's now 103 year old aunt.  Pictures of my mother in law, my son, my spouse, a family reunion from 2012, and several vacations.  Lots and lots of memories. 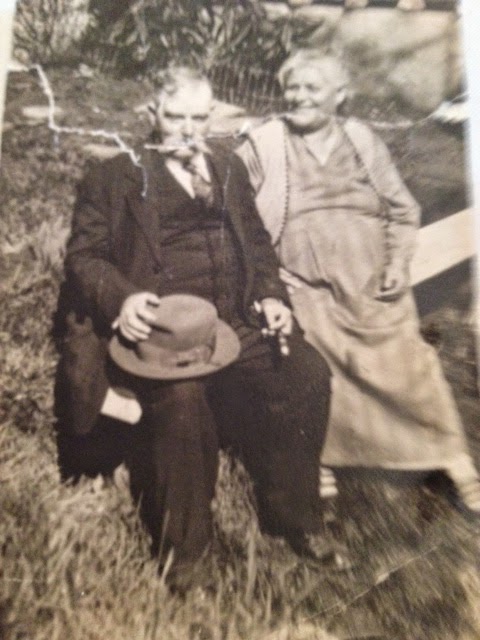 And this photo I took at the house of one of my spouse's cousins.  It's a photo of an old family photo.

How many of us have spent treasured times with elderly relatives while they showed us pictures of our families from years ago?  How many memories were passed on?  How many stories were told?

Here's a personal memory.  Years ago, in an album, I ran across a photo of three young girls.  It was in black and white.  One of the girls looked just like me (almost exactly like me!) but the dresses they wore looked like something out of the 1920's.  They posed, formally.

Fortunately, someone had written on the back of the photo.  The photo was of my mother, and two of her sisters.  And yes, it was taken in the 1920's.  I looked at this photo and marveled, just as the blogger had done. Except my mother was long dead, and could not share her memories of the day.

Will I be sharing photos with my yet-to-be-born grandchildren one day?  Or will those photos languish in a landfill somewhere, in a computer long discarded?

Do you print out your treasured digital photos, or display them in a digital photo frame?  Or are you a digital hoarder, like me?
Posted by bookworm at 6:22 AM