The Still Unsolved Mystery of the Historic Wartime Photo

I originally published this post in May of 2011, and repeated it in August of 2014.  I have never had this mystery solved, so I am republishing this post in hopes that someone will read this, and know something about this photo.

On my almost daily walks through downtown Binghamton, I frequently pass a number of historic buildings, among them the Security Mutual building.

Several weeks ago, scaffolding appeared around the building.  Some window work is being done. Two or three weeks ago some banners appeared, strung between the supports of the scaffolding.  One of them features a photo it says was taken of employees, right outside the front entrance, on Christmas Day 1943.

It's hard to see the photo (I had to stand in the street to take this and I tried to get the entire banner into the shot) but the photo contains mainly women.  There are only a few men, and they are old.  This tracks with the fact that this photo was taken during World War II.  The young men were fighting overseas.

How many Security Mutual employees went off to war?  Did they all return safely?  I don't know.

Were all of these women working there before the war?  Or did some take the place of the soldier employees, to disappear into the home again after the fighting was over?

Then, I had still another question.  Right now I have no answer to this question, either.

What were they doing there on Christmas Day, 1943, instead of being with their families back at home?

Did Security Mutual ask them to come in for a company sponsored Christmas dinner?  Or, because of the war effort, did they have to work?

Why the photo, to begin with?  Was it sent to soldiers overseas?  Was it done to boost morale? 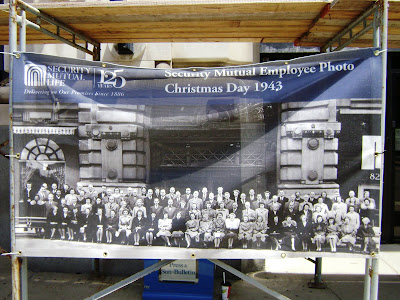 I would love to know the story behind this photo.  Do you know?
Posted by bookworm at 5:59 AM