Today is Pi Day, so named because, in the American way of writing dates, it is 3-14, which is also the first three digits of the value of Pi.  Here is a brief history of pi, which is the relationship of the radius of a circle to its diameter.  No matter how big or small the circle is, pi is the same.  Additionally, pi never repeats because it is an irrational number.  This, in fact, was first proven in 1761.

Hence, it has become a day for celebrating science, and pie...I mean, pi.

Today, I feature my spouse, the family cook, and his first attempt yesterday at a Weight Watching Shepherd's Pie. This serves two as a main course.  If you aren't weight watching, you may want to make more.

My spouse has been cooking for over 50 years, so he is someone who doesn't measure.  All of this is approximate, so don't blame me if it doesn't come out right.

Preheat the oven to 450 degrees.

First, you are going to cook the vegetables.  Start by sauteing the garlic in about 1 tbsp of butter, for just a few seconds until it just starts to brown. 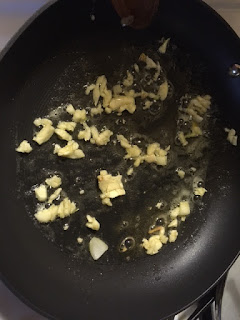 Immediately, add onion and celery and cook until they soften. Then, add the peppers and carrots. Let everything saute over medium heat, covered, for about 10 minutes.  Add the peas last, if you have them.

In the meantime, take the cooked potatoes, put in a saucepan with the rest of the butter,  Mash, and keep warm.

Incidentally, if you saw the sprouting eyes on the potatoes, you may want to note that these were German Butterball potatoes, bought at a local farmers market last fall. They showed some pretty good storage qualities!


Sauce
Sprinkle 2 tbsp of white whole wheat flour or plain white flour onto the cooked veggies, and cook about two minutes, letting the flour get incorporated and slightly cooked (so it loses the raw taste it would otherwise have). You want to hear sizzling and see steam, but don't burn anything.  Let cook, uncovered, three to four minutes. 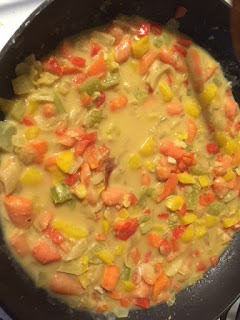 Now add liquid - part almond milk  a little at a time, stir, let thicken, until you have a sauce in the pan which is like a thin pancake batter.  Now, start adding the turkey broth and keep stirring.  You want this to continue to thicken. 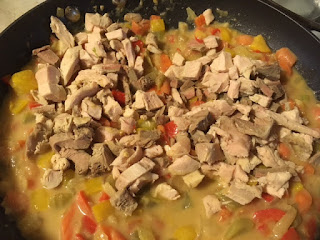 Now, pour the mixture into a pie pan.  Take the mashed potatoes and totally cover the top of the mixture, making sure there are no holes.  You are treating this as an upper crust. 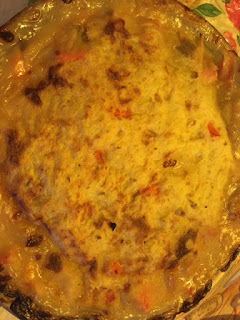 Now bake at 450 degrees for about 30 minutes, or until crust forms on the potato and it is lightly browned.  Let set for several minutes.  It was a good first effort, but again, not highly traditional.

Enjoy, because enjoying food, unlike Pi, is quite rational.
Posted by bookworm at 7:07 AM