It's time for me, a person not known for her cooking skills, to entertain her readers with my cooking adventures.  And, I need all my energy for next month's Blogging from A to Z Challenge, so I may be featuring more reruns this week.  Anyway, here's a blog post from two years ago:

Back in the 1960's, when I was growing up, I had to take a subject called "home economics" (home ec, for short).  Meanwhile, boys got shop classes. Although I failed home ec (and I wasn't the only one - see the comment from fellow blogger Sue McPeak in another post)  - yes, I really did fail it, but I took home some nice recipes from the cooking part of the course.  One was for homemade grape jelly (Yes!  I learned to make homemade jelly in New York City). Another treasured recipe was for homemade chocolate pudding.

Now, with my need to increase my calcium intake through food, I've discovered non dairy nut milks, and puddings have become one of my favorite desserts.

For those of the Jewish faith, next week is Passover, an eight day observance when various foods (many grains, legumes, and a number of other foods) are fully or partially banned from our tables. One banned food is corn and items made from corn.  So commercial pudding is out for me.  True, there is commercial Passover pudding mix, but the one time I had it - I'm not trying it again.

It's time for homemade pudding.

Um...not so fast.  One of the key ingredients of home made pudding is cornstarch.  Time for research!

After some Internet searching and an experiment, I came up with this recipe.  The recipe needs to be perfected, but it's a good start.

So, drum roll, I present to you, my dear readers, something you don't have to be Jewish to enjoy:

Homemade Non Dairy Chocolate Pudding (Makes 4 servings) (sorry, metric readers; you are on your own)

Method
Place almond milk, sugar, cocoa powder, potato or cornstarch, and vanilla extract in a saucepan over low heat.   Stir together until thick and smooth.  Take off heat and immediately pour into 4 small serving bowls.  Let cool.  I served it with raspberries on top. 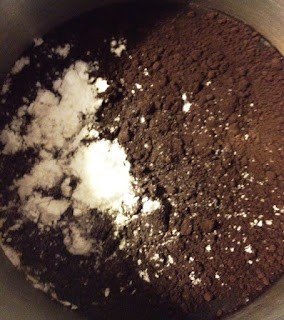 This is what the mix looked like before I stirred it.  The black cocoa, which is an ultra-Dutched cocoa (all the acid has been neutralized) is dark.  You can use it here instead of regular cocoa, but do not use it in any recipe that needs acidity, such as a recipe using baking soda.

And that's it!
When I make it again, I will use a tiny bit more thickening agent, as it seemed a tad bit watery, but that was my only complaint.  If you make it, I invite your comments
Posted by bookworm at 6:28 AM

Email ThisBlogThis!Share to TwitterShare to FacebookShare to Pinterest
Labels: Passover