The battle, off the coast of Virginia of the Union ironclad U.S.S. Monitor vs. the Confederate ironclad Merrimack (not the Merrimac, which was another ship put into service around 1864) was drummed (so to speak) into me in elementary school in New York City, back in the early 1960's.

The wood from which the keel of the Monitor was cut came from this area, now occupied partially by a site called Finch Hollow.

The site of the sawmill where the keel of the U.S.S.Monitor was milled is in walking distance of my home near Johnson City, in upstate New York.  The site is, in the present day, occupied by an enclosed shopping mall, the Oakdale Mall.


Like many malls, the Oakdale Mall has seen better days. It may default on a loan next year, in fact.  Its future is in doubt.

Apparently, back around 1998, there was a historical marker in the Oakdale Mall commemorating the history of the Monitor.

Re Finch Hollow, it still exists.  If you drive north on Oakdale Road (which runs north and south, just to the west of the mall)  from the mall, you will find a nature center on the site. I haven't been there in many years, but I remember going there with my then young son.  I don't remember any commemoration of its role in the Civil War on the site, however.

The Monitor (what is left of it) was discovered in 1973 and parts have been brought to The Mariners' Museum in Newport News, VA.  The keel, I am sure, is long gone.  Restorers are in a race against time to preserve the remaining metal parts and guns.  I hope to visit the museum although I've been hoping to do that since before the 150th anniversary of the battle on March 9, 2012.

Well, in the deserted part of the Oakdale Mall that I blogged about yesterday, there is something that few people see anymore, because almost all the stores in that section are closed. 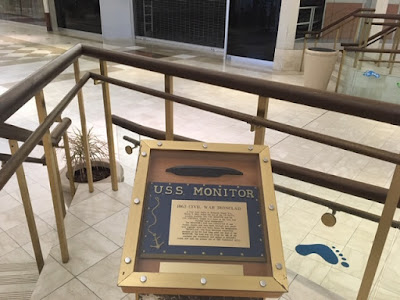 Lonely, the Monitor marker is ignored by mall walkers who walk right by it.

If the Oakdale Mall drifts into history, what will happen to that marker?

I never realized my elementary school Civil War studies would lead to something right in my very (so to speak) front yard.

Have you ever explored the history of your area?
Posted by bookworm at 11:25 AM