For the first winter in a long time, we are doing a lot of walking outside.  Fortunately, the weather has had enough relatively mild stretches (ignoring our 41 inch snowstorm in December). 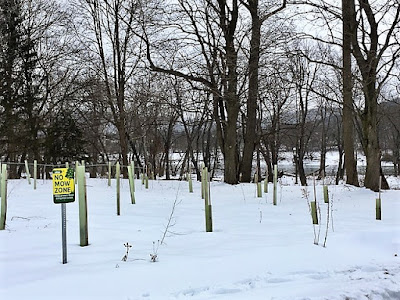 Lately we've added some new neighborhoods to our routine.  On a walk this weekend, I saw this - a plot of land with poles and a "no mow zone flood mitigation" sign.  It's near the Susquehanna River, in a neighborhood which has had flooding in the past.  I know about no mow zones, but what are those poles for?

Joining Sandee at Comedy Plus for her #WordlessWednesday.