Do Wine and Chocolate Go Together?

It's the day before Valentine's Day and it's Friday the 13th. The pressure is on - I should be coming up with a post about love, or romance, or at least wine.

Ah, wine.  Either I've just gained a lot of readers for this post, or lost their interest.  So, up front, let me admit - I am no wine expert.  Or even close to it.  When people swirl a wine in their mouths and gush about the notes of peach, blackberry, tobacco, leather, heather, or whatever, I say "um, this tastes like - uh, wine."

So let's talk about chocolate, instead. 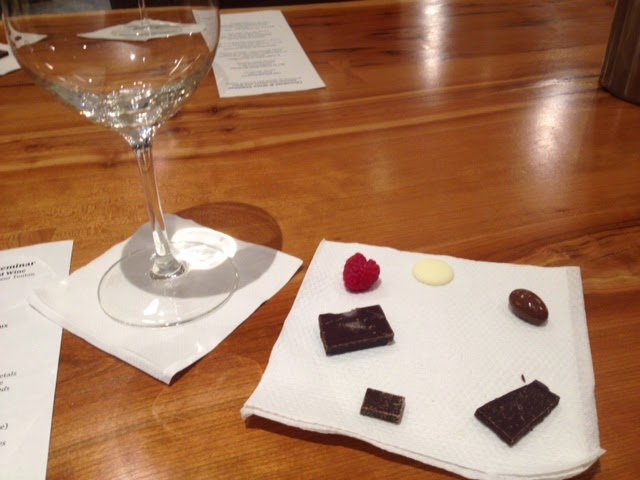 What goes better with Valentine's Day than chocolate? Wine.  The problem is, they usually don't go together.  Wine and chocolate don't mix.  Or do they?

Last year, for example, I decided to try a New York chocolate/grape wine, Chocolate Lab wine. I never did write my review of it because I was so disappointed.

This time, though, I would be trying something paired by a wine expert. 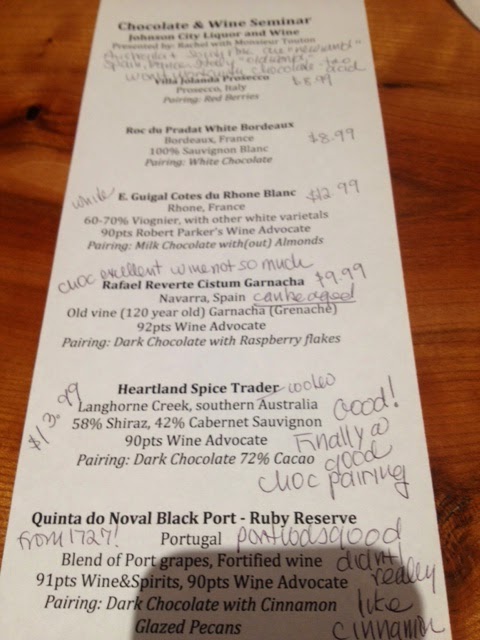 The six pairings began.  The first wine was prosecco, a sparkling white wine from the eastern part of Italy.  It is sparkling wine, NOT Champagne.  The really nice thing about prosecco (besides its price) is that it is approachable  - a good beginner's choice.  I love prosecco.

This wine just isn't good with chocolate (told you so!), and, instead of chocolate, it was paired with the raspberry.  By tasting this combo, I learned why my previous experiences with wine and chocolate hadn't worked.  The wines were just too acid. And the chocolates were wrong.

Last night, I learned that chocolate can be paired with wine.  It's hard to do but, like all hard things, it has its rewards.  Above are my notes from my tasting.  (One note - the port "from 1727" - it was the company, not the port, that dated from 1727.)

In the past year, I've decided to be DIFFERENT (my word for 2015).  My early close encounters with wine were of the Manischewitz/Boone's Farm/1970's sangria kind, and, during the 40 years of my adulthood, I had never progressed past super-sweet.  I had never learned how to pair wine with food, either.

Last year, I decided to learn more about wine, and I've had a good time doing so, even taking two trips into Finger Lakes wine country for that purpose.   I've learned a little about wine (just enough to be dangerous), even though my drink of choice with food continues to be - believe it or not - flavored seltzer.

Still, I've just begun to learn just how complex the art of wine is.  I live just about an hour outside New York's wine country.  As our wine expert said last night, you could fling certain types of grapevines on the ground here, and they would grow.  Catawbas, Niagaras and Concords do quite well here.  Other grapevines need a lot more care, but wineries are popping up everywhere around some of the Finger Lakes.  On parts of Seneca Lake, you can almost literally walk from winery to winery, if you don't mind dodging cars.

This weekend, some wineries are doing chocolate and wine pairings.  Now, if only we could start growing cacao in the Finger Lakes, we would be all set.  Just think.  Native New York chocolate.

New York - The State of Romance.

What food or beverage does your home area specialize in?
Posted by bookworm at 6:29 AM

Email ThisBlogThis!Share to TwitterShare to FacebookShare to Pinterest
Labels: Wine